ALA was a blast for bX! 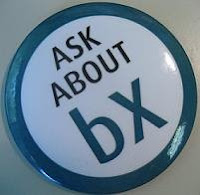 Last week, we proudly presented the new bX scholarly recommender service to customers and prospects at the American Library Association (ALA) Annual conference in Chicago. This was the first ALA for bX, now that it’s out of development and in production at many libraries, so it was a very exciting time for all Ex Libris staff involved, to be able to show it, talk about it “for real,” and inform those interested that it’s immediately available.

There was a lot of interest at the Ex Libris booth — Loralynne Evans, our North American marketing manager, had made up colorful badges in order to prompt questions, and they worked! We showed many live demos of the bX service at the booth, and even had opportunities to chat about it while standing in line for lunch at the Au Bon Pain downstairs in the convention center.

Marshall Breeding, noted library industry journalist, wrote about bX for the next issue of “Smart Libraries Newsletter.” Thanks to the agreement of ALA TechSource, we were able to print copies of this article for distribution at the booth

In addition to the booth demos, we also held a separate session, dedicated to bX, in the Chicago Hilton on Sunday morning. Many dozens of customers and prospects found their way to the “basement ballroom” in order to hear a three-part presentation which featured Bob Gerrity from Boston College and Oren Beit-Arie and me from Ex Libris.

Oren was the set-up man: he talked about the importance of user contribution in online environments; changes going on in scholarly communication; how recommender systems in general enhance discovery processes; how bX recommendations are generated and how we are really just at the beginning of more intelligent applications of aggregate usage data. 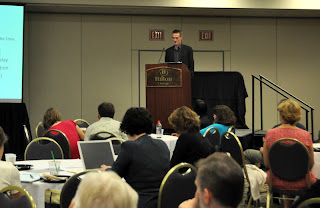 Bob, of course, spoke from the library point of view; he described Boston College’s approach to its library users and how the staff fosters a willingness to experiment, as well as how the BC librarians feel that library contribution of data to aggregate data sets is important for improvement of services. He also described BC’s participation in the bX alpha testing program earlier this year and how its (picky! detail-oriented!) subject librarians contributed to the test and verified quality of recommendations.

I showed screenshots and live demos of the service from various bX customer libraries as well as the steps for the registration process. Here’s just a few…
Aalborg University
Boston College
Stellenbosch University
University of Calgary

Audience members were enthused and peppered us with questions covering all aspects of the system; many indicated an intention to buy in time for the new school term which is fast approaching.

We are all looking forward to continuing bX on its worldly way — over 100 sites from Australia to China to USA to Finland to Israel to Canada to South Africa (15 countries so far) have signed up to license or trial the service since its launch!